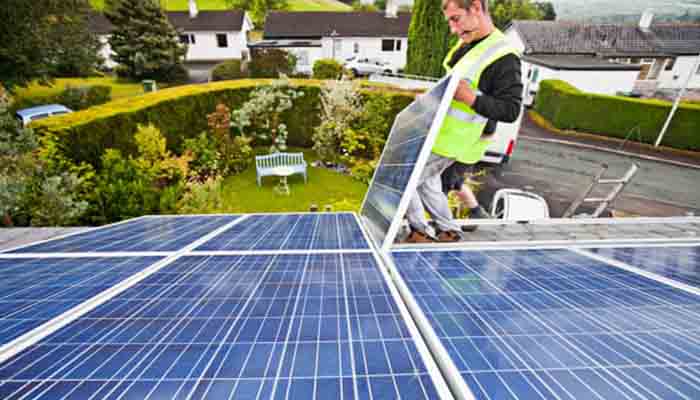 The Labour party has accused the government of “actively dismantling” the UK’s solar power industry after new installations by households collapsed by 94% last month.

Standing in for Jeremy Corbyn, Long-Bailey said solar power had the potential to cut household bills and carbon emissions while creating thousands of jobs.

“But the government, for some reason, appears to be determined to kill it off, while continuing to cheerlead for fracking,” she said.

The solar feed-in tariffs had encouraged more than 800,000 homes to fit to their roofs solar photovoltaics, the panels which generate electricity. The end of the scheme was widely expected after a series of cuts to subsidy levels in recent years.

Renewable energy developers and green groups had hoped ministers would replace the scheme with another incentive system to avoid dashing the sector’s momentum and accelerating job losses in the industry.

Instead, officials confirmed that new solar pv installations would be expected to give their unused clean power to energy companies for free until a new scheme is set up. A spokesman for the government said new proposals will be unveiled in the coming days.

“Parliament declared a climate emergency yet there is no evidence that this government takes this seriously,” Long-Bailey said.

The opposition said data showed the scrapping of home panel subsidies from April caused new solar power capacity to fall from 79MW in March to only 5MW last month.

At that rate it would take the government until 2092 to match Labour’s commitment to install solar panels on an additional 1.75m homes within its first term in power.

The slowdown poses a big risk to plans put forward by the independent Committee on Climate Change to create a net zero carbon economy by 2045.

Trade unions said last month that the number of jobs in renewable energyhad plunged by nearly a third in recent years because of a slowdown in the rollout of new projects.

In response to the opposition, David Lidington, the Cabinet Office minister, told MPs that since 2010 the UK had cut greenhouse gas emissions faster than any other G7 nation. He said ministers would outline a plan to tackle the climate crisis and create green jobs “later this year”.

Lidington said: “There are 400,000 jobs already in low-carbon businesses and their supply chains throughout the UK and scope for much larger low-carbon growth to support up to 2m jobs in the future.

“We now have received advice from the independent climate change committee about how to time and to legislate for our transition to a completely decarbonised economy, and we will be bringing forward our decisions later this year as to how and when will be taking that action.”

Theresa May had intended to confront Donald Trump about his views on climate breakdown during his state visit this week. “But with her government actively dismantling the UK solar industry it is unclear who has the most to teach the other about climate change denial,” Long-Bailey said.