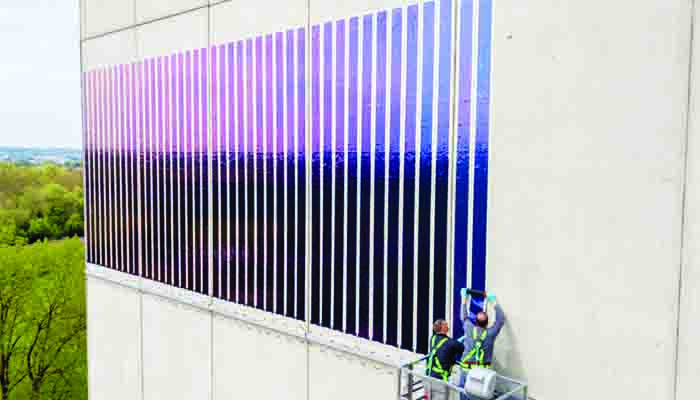 The two companies have glued 230 square meters of solar film to the rough concrete surface of a grain silo in Donauwörth, Germany. The film is expected to generate approximately 6,700 kWh kilowatt-hours of solar power per year. Lechwerke and Heliatek want to open up new potential for the use of PV on other surfaces with the pilot project.

About 230 square meters of surface area on ​​a grain silo has been covered with special solar foil in Donauwörth, in the Donau-Ries district in Bavaria, Germany. The 10 kW installation is composed of 120 photovoltaic elements supplied by Dresden-based manufacturer Heliatek.

In cooperation with energy provider Lechwerke, the company plans to conduct long-term tests on the technology, which was deployed on a rough concrete surface. Through this pilot project, the companies want to monitor annual electricity production, which has been estimated at about 6,700 kWh kilowatt-hours. The generated solar power will be used for self-consumption by the grain silo.

Heliatek wants to incorporate the results of the pilot into the development of its own products, as it needs to optimize the solar foil before it launches series production of the material in the coming year. In addition, the companies expect to identify other potential uses, including the installation of PV on the surfaces of factory buildings and warehouses. Even in those applications, the generated solar power could then be used for self-consumption purposes.

“Our previous experience has shown that the costs for energy-efficient building upgrades are lower than with conventional PV modules,” explained Michael Meißner, engineer of product development at Heliatek.

The company says the flexible solar modules consist of ultra-thin layers of organic, carbon-based molecules that are applied to a flexible PET film at very low temperatures. In the case of the grain silo, this was done on the south side of the structure at a height of about 20 meters, to avoid shadows cast by adjacent buildings.

Last year, Heliatek launched another pilot project with Innogy at the port of Duisburg, Germany. The companies glued 185 square meters of solar foil to the metal facade of a warehouse at the site.