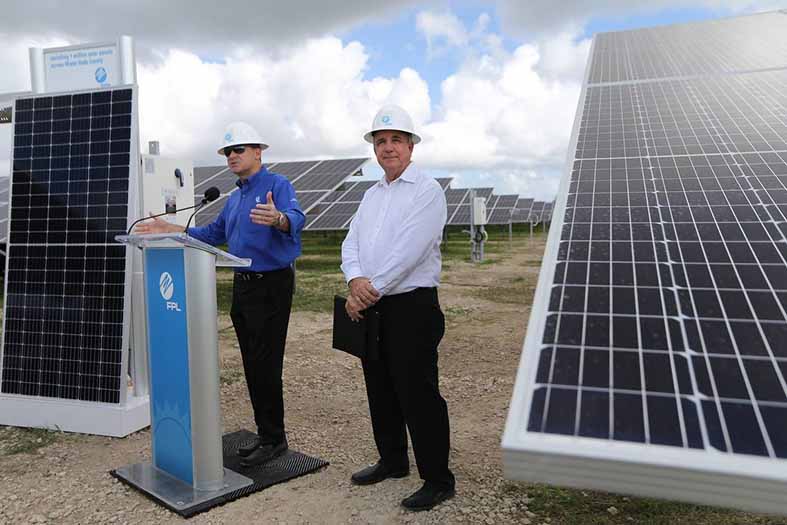 Plans for new Metrorail station in Coconut Grove show a solar-powered transportation hub with affordable housing. Developer David Martin of Terra called the project the start of a plan to build a community prepared for climate change.BY TERRA GROUP/TOUZET STUDIO

When FPL announced earlier this year that it set a massive goal of 30 million solar panels by 2030, the announcement was made with fanfare.

Television advertisements and social media campaigns boasted the large commitment, and the “SolarTogether” program is now aiming to build 20 solar power plants over the next two years.

But is the commitment to clean energy just a smokescreen?

Documents filed ahead of this summer’s Florida Energy Efficiency and Conservation Act, or FEECA, proceedings reveal an interesting dichotomy in FPL’s commitment to renewable energy. According to the filings for the once-in-a-decade conference, FPL said “none of the demand-side renewable energy system measures proved cost-effective.”

In other words, solar is cost-effective for the company when it is the one building the plant and generating the power.

The FEECA hearing is scheduled to begin on Aug. 12, but the schedule is subject to change.

Supply-side renewable energy products are those which the utilities build for customers, who pay for it on their utility bills. The solar energy is part of a rate base, which utilities get a return on.

In testimony by Thomas Koch, a senior manager at FPL, he said benefits for demand-side programs have decreased by more than 33 percent in the last five years. He said new, more efficient building codes and standards have also changed the role FPL plays in energy efficiency.

When asked if the PSC should set any additional goals for efficiency improvements, FPL answered, “No.”

Florida could soon start burying more power lines. You might pick up the tab.

Investor-owned utilities — like FPL, for example — profit from the energy sold to customers. The solar energy FPL generates, for instance, represents a portion of the total rate base charges that appear on a customer’s bill. And when customers install and use their own solar, they end up buying less energy from the utility.

If customers use less of the utility’s energy, the company still has to cover its fixed costs while selling less electricity. That also means lower bottom lines for the regulated monopolies.

“The longer-term threat of fully exiting from the grid [or customers using the electric grid solely for backup purposes] raises the potential for irreparable damages to revenues and growth prospects,” wrote the Edison Electric Institute, the investor-owned utility trade group, in a 2013 report.

McGrath says that the universal solar FPL provides is more than twice as cost-effective as rooftop solar, which helps keep FPL’s rates lower than most. He added that since customers no longer need to be encouraged to exhibit energy efficient behavior, there is less of an incentive for FPL — and therefore, its ratepayers — to support the rooftop solar management programs as much as it once did.

Most homes are far more energy efficient than they were 40 years ago, and even the most basic appliances often have the “Energy Star” seal of approval, he pointed out.

FPL customers are the ones who subsidize the demand-side programs, he said, and the company is “not philanthropic.”

“We just don’t believe in subsidizing actions that a customer would normally take,” he said. “As we move into the 21st century, there needs to be a 21st-century approach to energy efficiency.”

While the FEECA statute technically says that utilities should support customer-owned renewable energy like rooftop solar, historically only environmental groups have advocated for it.

In 2016, solar industry advocates tried to get a proposal on the ballot that would allow homeowners and businesses to sell excess solar generation to third parties in an effort to expand solar, but the proposal never made it onto the ballot. The practice is allowed in all but four other states.

That same election cycle, utilities backed a ballot measure that claimed to expand solar in Florida but was actually intended to amend language in the Florida Constitution to limit solar expansion in the future. The misleading Amendment 1 proposal failed to get the required 60 percent vote total,just a month after the Herald/Times obtained an audio recording of Sal Nuzzo, a vice president at the James Madison Institute in Tallahassee, detailing the misleading strategies used to create and promote the amendment, which received about $20 million in utility industry support.

George Cavros, an energy policy attorney at the Southern Alliance For Clean Energy, agreed that FPL’s significant commitment to community solar is a good thing, as it gets more solar energy in the system.

However, he takes issue with the regulatory incentive in the PSC statute that allows for FPL to build, own and operate the solar plants. To a certain extent, when more energy is used, the more the companies are able to profit.

SACE was an outspoken opponent of Amendment 1 in 2016.

“Rooftop solar is pretty robust,” Cavros said. “But there’s a regulatory disincentive for them to help customers reduce energy use. It’s harder for them to justify.”

Aliki Moncrief, executive director of Florida Conservation Voters, said her organization is one of many organizing a strategy ahead of FEECA proceedings in August.

She said as more people put panels on their roofs, the demand for utility-provided electricity goes down. The utilities get a premium profit for the energy they supply, Moncrief said, and when that decreases it threatens their bottom line. She added that since the cost of renewable energy is lower and the demand for it is higher, the investor-owned utilities like FPL are simply responding to the market demand, which is not necessarily a bad thing.

However, the PSC should be looking at this with a critical eye, she said.

“There’s a downside to the consolidation in a handful of large solar facilities as opposed to distributed solar,” she said. “We are missing out on opportunities to create micro-grids that would make us more resilient. It’s a balancing act.”