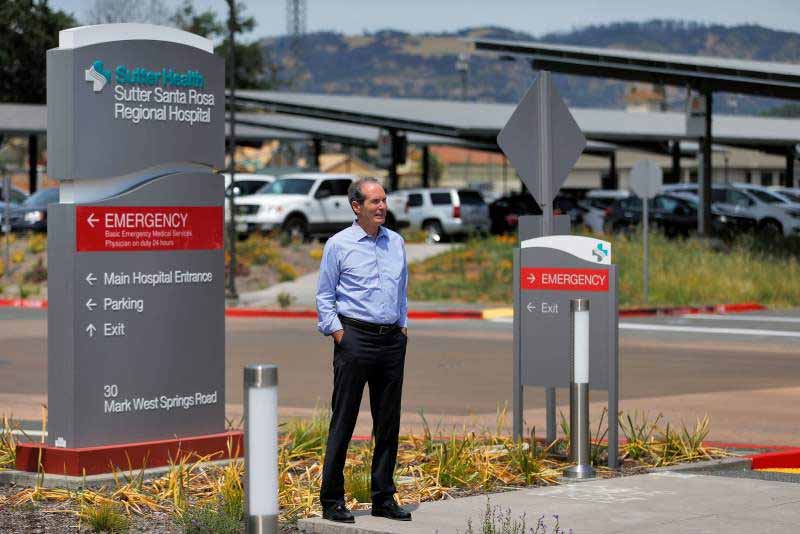 For Sutter Health, the solar panels are a big step toward greater energy independence and less reliance on a utility severely weakened by bigger and deadlier wildfires.

“The impetus is really sustainability and self-reliance, so that we don’t have to rely on PG&E,” hospital spokesman Shaun Ralston said. “There’s also the potential terror threat when you’re on the grid. … There’s a desire to be off the grid, because we don’t want to deal with the vulnerability.”

With the capacity to generate 2.4 million kilowatt-hours a year, Sutter’s solar array could power 500 patient rooms, or 206 homes, during that period. The solar panels are located on carports throughout the extensive parking lots that surround Sutter’s main hospital and adjacent medical office building in north Santa Rosa.

Bader said that level of electric generation is a “really big deal” for the hospital, which is among the largest energy users in the community. In its move away from PG&E’s power grid, Sutter has turned to Ameresco Inc., a company that builds, owns, operates and maintains green energy infrastructure for large customers nationwide.

At a Monday ceremony, Sutter officials will symbolically “flip the switch” on its solar panels. When it does so, the $300,000 yearly check it cuts to PG&E eventually will be sharply reduced, by an estimated more than $200,000 annually. That money will go to pay for the electricity generated by Ameresco’s solar power infrastructure.

“We’ll buy all the electricity they (solar panels) generate on our site,” Bader said. “The electricity is priced in such a way that Ameresco recoups their cost and makes a profit. Even with all that, we’re still paying less than with PG&E.”

The solar project adds to the Santa Rosa hospital’s sustainability efforts. The campus also is equipped with two 600-foot water wells and an on-site water treatment operation, as well as a 350,000-gallon water storage system under the hospital that can supply water to fire sprinklers and fire hydrants.

“We are seeing a smarter grid emerging as a more flexible, reliable and energy-storing system that complements and enables new technologies that our customers are using in their homes and communities,” Contreras said.

The deal between Ameresco and Sutter is not one in which the health care provider goes from one utility monopoly to another. Ameresco, based in Framingham, Massachusetts, said it’s a business partnership aimed at giving the hospital greater flexibility to use alternate energy sources, as well as enhanced resiliency from a natural disaster or other catastrophic event that compromises the traditional electrical grid.

“The idea is for customers to build into their portfolio some resiliencies,” said Hans Meyer, Ameresco’s energy director. “Fortunately, we’re at a point in time in which these projects are also economically attractive.”

Locally, the word resiliency has come to mean the capacity to recover from the devastation wrought by the 2017 Tubbs fire, especially for those who lost homes and loved ones.

Ameresco used the term in a recent white paper to describe the ability for corporations, government agencies and other large organizations to mitigate the effects of events such as hurricanes, wildfires, cyberattacks or major energy systems equipment failure.

“Mission-critical facilities, such as military bases and hospitals, have been among the first movers on resiliency, in part because of the importance of their operations to human health and national security,” according to the Ameresco white paper.

The solar array at the Sutter campus is made up of a series of individual inverters that convert solar power to electricity. The inverters, he said, are isolated at the “solar canopy level” throughout the parking lot, so that one portion of the array could be shut down without shutting down the entire system, Meyer said.

Bader said when Sutter officials last year learned of the planned PG&E power outages as part of the utility’s fire-prevention efforts, they started thinking about ways to mitigate the effects.

“When this whole concept came out last year, (PG&E) placed this hospital, Sutter Santa Rosa Regional, on their list as one of the facilities that would be shut down,” he said. “Our administrators at the hospital said, ‘We’re a place where people go, we need to be open for our community.’ ”

The potential effects of planned PG&E shut-offs sparked further discussion about energy independence and topics such as microgrids, local energy systems with the ability to disconnect from the traditional electric grid to operate autonomously.

“That’s a driving force for why we’re even more thinking about these micro-grid ideas,” Bader said.

Another major solar power producer is Kaiser Permanente, which outfitted its Santa Rosa hospital and medical buildings last year. Jodie Clay, a Kaiser facilities services manager, said the projects are part of a national effort in support of Kaiser’s goal to become carbon neutral by 2020.

Contreras said PG&E has embraced the concept of microgrids, integrating them into the utility’s larger grid. Microgrids, she said, also enhance PG&E’s own flexibility and resilience in the event of a natural disaster or broader grid outages.

Contreras said the utility supports a number of microgrids installed at military bases, universities, prisons, commercial properties, campuses and hospitals. One notable microgrid project is located on the Blue Lake Rancheria, a small Native American community in Northern California. She said one of the main purposes of the project was to provide greater safety in an area prone to natural disasters, including fire.

Though the Sutter campus will have the capacity to generate most of its electricity on-site, it can’t go completely “off the grid.” Bader said to do so, the solar system would need energy storage capacity and a layer of electronic controls that allow the system to operate independently.

“In this era of wildfires, this kind of thing is going to become more and more important,” Sutter Health’s energy manager said.

You can reach Staff Writer Martin Espinoza at 707-521-5213 or martin.espinoza@pressdemocrat.com. On Twitter @pressreno.