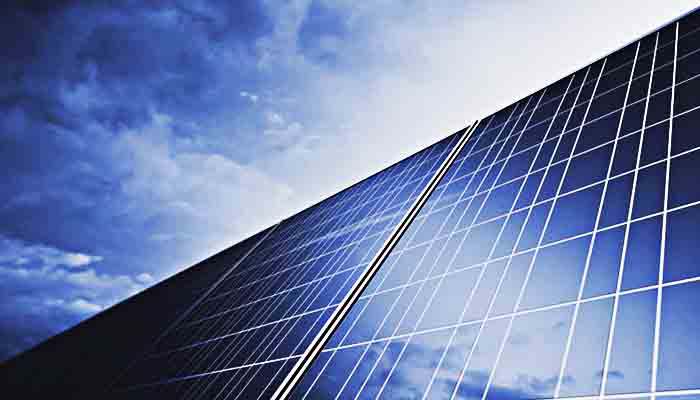 (Augusta, ME) – Bipartisan majorities in the Maine Senate and House have given final approval to a historic solar energy billthat would give residents, businesses, and towns more opportunities to invest in affordable solar power. LD 1711, sponsored by Senate Minority Leader Dana Dow (R-Lincoln), is awaiting the signature of Governor Janet Mills, who has signaled she intends to sign it into law after campaigning on the need for more solar power in Maine.

The solar bill, combined with a bill that will expand the state’s Renewable Portfolio Standard (RPS) to 80% by 2030 and sets a goal of 100% renewable by 2050, represents the most significant renewable energy action in more than eight years. Previous versions of the solar bill had been passed by the Legislature but vetoed by former Governor Paul LePage, who was also a vocal opponent of the RPS.

LD 1711 is projected to result in the development of more than 400 megawatts of distributed solar power and create more than 500 new jobs by bringing much needed regulatory predictability and a competitive marketplace to reduce energy costs. It uses competitive markets to drive down costs, and has requirements and options to increase access to solar for low- and median-income households.

The bill advances “distributed solar generation” to advance small-scale solar projects throughout the electric grid that power homes or buildings for individual consumers. It targets the developments of larger projects of one to five megawatts, which can serve the needs of local businesses, municipalities, and larger-scale community solar farms.

LD 1711 also addresses many barriers that currently limit investment in solar by lifting an arbitrary nine-person limit on the number of participants in a community solar farm and eliminating demand charges that make net metering less attractive for larger commercial companies.

Maine has lagged far behind the region and the country as a whole on solar by failing to modernize its policies to capture the benefits of rapidly improving solar technology. The state sits last place in New England for solar development and jobs per capita, statistics which are expected to change as a result of these bills.

In response to the solar bill’s approval by the Legislature and expected signature by the governor, the statewide coalition that pushed for the solar bill’s adoption released the following statements from its members:

“A key component of the legislation will include low- and moderate-income households in municipal-focused solar farms. This is the democratization of renewable energy for Maine residents.” – John Egan, Chief Investment Officer, Coastal Enterprises, Inc.

“For the first time since we began our own work in 2014, Belfast is excited to see solar policy that will benefit all Maine municipalities.” – Sadie Lloyd Mudge, Planner, City of Belfast

“After an eight-year drought, the floodgates are about to swing wide open for Maine’s solar industry with the passage of LD 1711. The combination of historically low solar technology costs and good pro-solar state policy will now make it possible for all Maine businesses and residents to derive a strong economic and environmental return on a solar investment.” – Phil Coupe, Co-founder, ReVision Energy

“It is refreshing to see bipartisan efforts from Maine lawmakers on solar policy finally rewarded with action. The collection of solar bills that passed this session represent a huge victory for all of Maine. Businesses and low-income households seeking to invest in solar now have a pathway to get there, and communities across the state will reap the benefits. Maine has opted to invest in local energy and local jobs in a manner that will having a lasting effect across our state.” – Vaughan Woodruff, President, Insource Renewables

“The passage of LD 1711 has injected a shot of adrenaline into Maine’s clean energy economy. We look forward to working with the Administration and our customers and partners in Maine to build from the promise of this important legislation to a real, robust solar and storage industry in the months and years to come.” – Ilan Gutherz, Vice President of Policy and Strategy, Borrego Solar

“SunRaise is proud of our state legislators and Governor Mills for their environmental leadership. We are looking forward to investing significant money into the local Maine economy to create jobs and benefit all ratepayers, land owners, and municipalities.” – Patrick Jackson, SVP Business Development, SunRaise Investments

“This is a historic day for clean energy in Maine. The community solar industry stands ready to invest in clean energy within the state. We thank Senate Republican Leader Dana Dow for his leadership to help get LD 1711 across the finish line and officially bring all the benefits of community solar to the Pine Tree State. This bill will dramatically expand access to renewable power, lower energy costs, and nearly double Maine’s solar work force.” – Jeff Cramer, Executive Director for the Coalition for Community Solar Access (CCSA)

“We’re really pleased here in the Town of Waldoboro to have played our part in supporting Senator Dana Dow in this bipartisan solar bill to put Maine on a job-creating, cost-competitive, and renewable energy path.” – Ron Philips, Town of Waldoboro Energy Committee

“This is wonderful news and means that our solar installation business unit will reopen, after briefly shutting down after LePage’s gross metering policy disrupted the marketplace and our project scheduling. We’ve handed off a few solar projects earlier this year, but with this progressive legislation and some new talented employees on the horizon, we will get re-staffed at our Midcoast, Boothbay Harbor location. This is great for Maine’s economy and the environment.” – Michael J. Mayhew, President, Heliotropic Technologies, Boothbay Harbor Professional Energy Engineering Services and Solar System Installations

“It is exciting to see bipartisan majorities of lawmakers collaborating with Governor Mills to advance home-grown clean energy in Maine that will create new jobs, reduce energy costs, and curb harmful carbon pollution. By modernizing our policies and leveraging a competitive marketplace we can give more residents, businesses, and towns the opportunity to invest in solar while reducing costs for all electric consumers. These two bills signal that our state is once again serious about accelerating the transition to energy independence and a clean energy economy.” – Dylan Voorhees, Clean Energy Director, Natural Resources Council of Maine

“Mainers have been waiting for this kind of climate action for a long time. These comprehensive policies to expand solar access and renewable energy investment will support our transition to 100% clean energy by 2050, if not before. Recent polling tells us that the vast majority of Maine people support that goal, and the bipartisan success of these critical clean energy policies will put us on the pathway to reach it.” – Kathleen Meil, Maine Conservation Voters

“The Legislature has finally moved to unshackle solar so that its undeniable economic and environmental benefits can flow to Mainers for years to come. This industry is poised to employ hundreds, invest tens of millions, and help to keep our air and water clean.” – Jeremy Payne, Maine Renewable Energy Association

“The Solar Energy Association of Maine is grateful for the visionary leadership displayed by enacting these two bills, by both Governor Mills and insightful legislators, including sponsors Senator Vitelli and Senator Dow. If Maine residents, and people everywhere on Mother Earth, are going to enjoy a good life, it will be in communities powered by clean, renewable energy. These bills create great momentum to propel Mainers along this pathway.” – Steve Weems, Solar Energy Association of Maine

“These bills will boost our clean energy economy, create hundreds of new jobs, and help Maine do our part to tackle climate change. The future of our communities and our natural places depends on moving toward a low-carbon future, and these bipartisan bills are an important step in that direction.” – Rob Wood, Director of Government Relations and Climate Policy, The Nature Conservancy in Maine

“With the strong bipartisan passage of LD 1711 and LD 1494, Maine can finally join the solar revolution and regain its national leadership in deploying homegrown renewable energy. Increasing renewables to 80 percent of Maine’s electricity by 2030 will create high-quality local jobs, reduce the state’s reliance on imported natural gas and oil, and achieve significant cuts in global warming emissions. By making it easier to invest in solar power, all Maine households, businesses, and towns will have the opportunity to lower their energy bills and become more energy independent.” – Steve Clemmer, Director of Energy Research, the Union of Concerned Scientists

“Maine needs clean energy targets that begin to match the scale of the environmental challenges we face. By establishing ambitious targets for transitioning to 100 percent renewable electricity statewide and making clean energy from community solar farms accessible to all Mainers, these bills will go a long way toward making a clean energy future a reality here in Maine.” – Carissa Maurin, State Director, Environment Maine

“Sierra Club Maine and our members are delighted with the passage of these important bills. With a goal of 100% renewable energy by 2050, Maine will again be leading the nation as we move toward climate sustainability. Our members and our fellow advocates have worked tirelessly to achieve this, and we are grateful for Senator Eloise Vitelli’s and Governor Mills’ leadership and the forward-thinking Maine legislators who offered their bipartisan support and approved this bill.” – Alice Elliott, Chapter Director, Sierra Club Maine