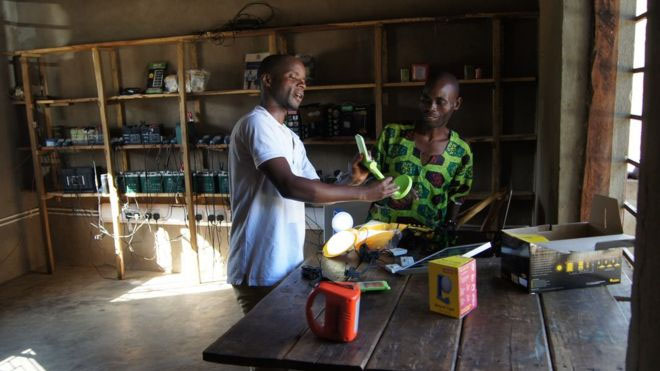 A solar power project to connect villages in Malawi has had a “life-changing” impact for rural communities.

The partnership, which has been backed by a £600,000 grant from the Scottish government, ensures locals own and operate the equipment.

It includes battery chargers and power connections for other small businesses.

Only 12% of Malawi’s 18 million population is connected to the main electricity grid, which dips to 2% in rural areas.

For the vast majority the main energy source is open fires, which puts pressure on the country’s forests.

Barber Hedison Charles, who had to drop out of school due to financial problems, said the project has had a huge impact.

He said: “This programme has changed my life. Before I had no money and now I have money because of my business.

“Before people were travelling almost 30km to have their hair cut, now people are getting their hair cut here. The solar system is helping me a lot.”

Prof Stuart Galloway, who led the initiative, said: “The aim was to make a direct impact on the communities involved so the project doesn’t just provide an engineering solution, but is actually improving lives.”

Other customers include those who want to rent and buy batteries and charge their mobile phones.

He said the project meant many local young people now had a livelihood.

Mr Story said: “It’s a global issue that a lot of young people are just loitering around unemployed, so the situation has changed simply because some have started running their businesses.

“Some have bought hair clippers, some are running video shows, at least some of the youths are self-employed.”

Two schools in Mandrade and Gola, with a combined pupil roll of more than 12,000, are now also supplied by solar energy, along with two health clinics.

Prof Galloway added: “One of the benefits has been that schools which use renewable energy are recording large numbers of students studying at night, and the most recent exam results indicate a substantial improvement in pass rates.

“Teachers are also more inclined to come and work in the schools because they have electricity.”

The percentage of households now using renewable energy in the villages the project has reached – Mandrade, Kandeu, Gola and Thendoin – has almost tripled, with energy access improving for more than 4,000 people.

Scottish international development minister Ben Macpherson praised the impact of the project and said it was an example of a “commitment to good global citizenship”.

He added: “Implementing efficient energy schemes in rural areas of Malawi will play a major role in alleviating poverty and reducing inequalities in some of the country’s most vulnerable communities.

“This project will continue to have a life changing impact beyond the three year grant period through enabling communities to develop new enterprises, supporting schools and helping hospitals.”

The Strathclyde team is now building on the success of the partnership, which ended in September, with a new initiative to install micro grids to support solar power in the district of Dedza in Malawi’s central region.

The project, which has been awarded £1.3m by the Scottish government, will create enough solar energy to connect about 50 households and 20 small businesses.