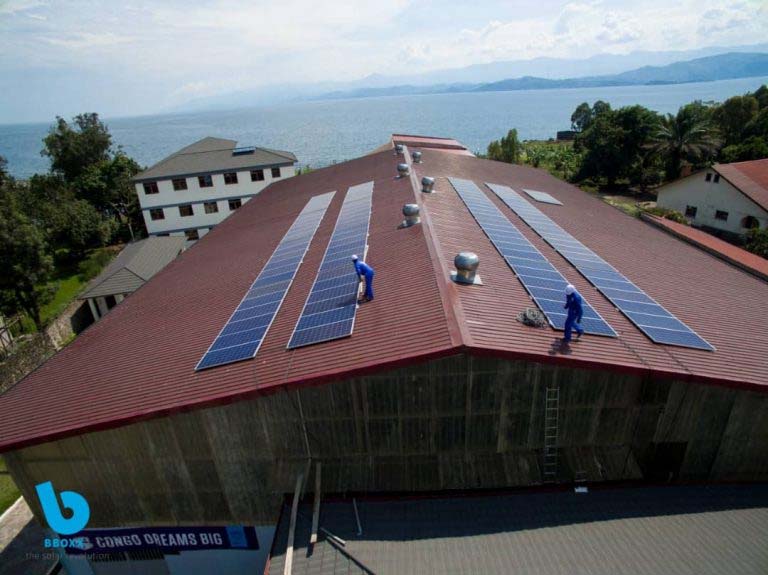 The “next-generation” utility has presented a micro-grid at a Togolese village. The concept can be reproduced and power schools, small businesses and homes alike. Even an internet connection is part of the project. Despite the World Bank and other institutions reaching out to provide capital for electricity supply, Germany-based Mobisol GmbH is currently in self-administered insolvency proceedings.

Bboxx, a provider of off-grid solar home solutions for rural communities in Africa, has unveiled a new concept in Togo. The village of Sikpé Afidégnon will become the first of Bboxx’s Tomorrow’s Connected Communities.

The village comprises 300 households with 4,000 people in the south of Togo. With the new project in place, the schools, households, streetlights and small shops will be powered using solar PV. Additionally, Bboxx offers other utility services, such as clean cooking, internet access and water pumps. The utility company provides internet access through a solar powered telecom tower. With that connection in place,  Bboxx can also make use of smart internet of things applications for remote monitoring and operations of the micro-grid.

Bboxx has implemented the concept in Togo alongside EDF, which holds a 50% stake in Bboxx Togo, under the brand “Bboxx avec EDF”. The project runs on a micro-grid which had been implemented by General Electric combining Bboxx solar home solutions into a micro-grid.

According to the company, Tomorrow’s Connected Community shows that the supply of electricity and essential services can be scaled from individual households to entire communities and businesses. Bboxx highlighted that its cooperation with its partners shows that a decentralized and digital future in the developing world is possible “We have shown what can be possible and we look forward to rolling this “community of the future” out across other locations globally,” Hamayun added.

Togo is pursuing a vision of 100% rural electrification by 2030. According to the government of Togo, solar energy is a preferred contender to reach that could, as small scale solar kits are most suitable to the needs of the population in question, without incurring hefty bills for grid connection.

In this vein, the World Bank, assisting Sub-Saharan countries in their mission to attainuniversal electricity supply has agreed to bolster the Regional Off-Grid Electrification Project (ROGEP) with access to $224 million in cash and credit.

According to the development bank, only 3 million people can currently access solar power through off-grid systems in West Africa and the Sahel. The bank estimates a further 208 million people in the region have no access to electricity.

Meanwhile, the Strategic investments in off-grid energy access: Scaling the utility of the future for the last mile report by analyst Wood Mackenzie Power & Renewables spells out how investment in off-grid solar, mini-grids and universal energy access projects is continuing to climb steeply. Commitments to the sector reportedly saw a 37% year on year increase from 2016 to 2017. Between 2017 and last year, investment rose 22%. Last year’s investment volume was clocked at $511 million, and almost $1.7 billion has been poured into the sector to date.

Despite the increased capital available, however, universal energy access is still a faraway ambition. The analysts wrote, there are around 1 billion people without access to electricity and 2 billion without reliable access. Approximately 400 million people have gained electricity access through off-grid solar between 2010 and 2017; by 2022, 740 million are expected to have joined that group.

Still with no lack of work in sight, not all companies involved in the pursuit of universal electricity supply are necessarily doing well. Germany-based Mobisol GmbH, an off-grid solar solutions provider, which has supplied more than 600,000 people with renewable energy already in the African market, had to file for preliminary self-administered insolvency proceedings. The District Court of Charlottenburg (Berlin) has approved the filing under the current managing director, Andrew Goodwin. The court has appointed Attorney at law, Friedemann Schade (BRL Boege Rohde Luebbehuesen), as the provisional trustee.

According to the company’s statement, the aim of the proceedings is a successful restructuring of the company, which will eventually allow bringing negotiations with investors, that had commenced at the beginning of this years, to a successful end.

Goodwin commented that, “with the trust placed in us by the workforce and the owners, we are convinced of Mobisol’s successful future. Mobisol´s unique business model with a mix of technology, financing and distribution of innovative solar systems holds immense potential and makes a real difference to the lives of people in regions with weak development in Africa and other parts of the world”.