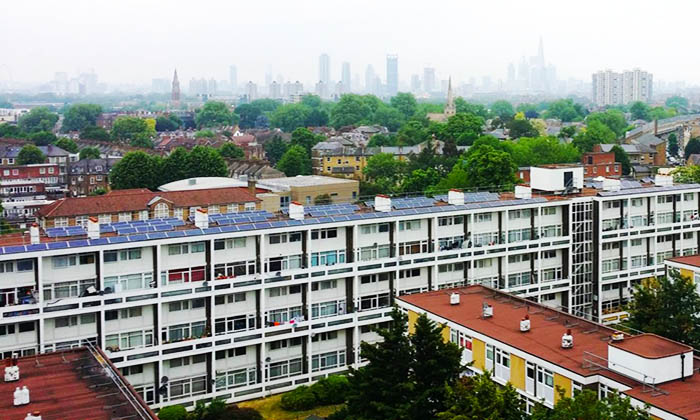 A social housing development of 100 dwellings will benefit from the electricity generated by 600 sq meters of PV panels. Any output not used by residents will power hot water tanks, effectively functioning as an energy storage element of the project.

The distributed generation unit of French electric utility EDF says it has completed what it calls France’s largest solar project for collective self-consumption.

EDF ENR said it had installed 300 PV panels on the roof of the Rochebelle 100-dwelling building in Alès managed by Logis Cévenols, a major social housing provider in the Gard region of southern France.

The 100 kW, 600m² installation is intended to power all the homes at the site as well as common areas as part of a project supported by the Occitanie regional government and France’s Environment and Energy Management Agency.

The developer said the solar power generated is evenly distributed using a control system and excess power – which cannot be exported back to the grid – is being used to heat water tanks at the building, effectively functioning as energy storage. “This distribution is made possible by activating each of the individual hot water tanks at the right time to store the surplus energy produced during the day and to ensure that no kilowatt produced during the day is lost,” EDF explained.

The collective self-consumption facility will save each household €100 per year, the company claimed.

The project is part of the Solar Plan launched by the utility in early 2017, which envisages deployment of 30 GW of solar energy generation capacity by 2035.

In February EDF launched an energy sharing project in the U.K. through its EDF Energy subsidiary. The CommUNITY project uses blockchain technology and enables residents of a building in Brixton, London to exchange solar energy among themselves on a peer-to-peer basis.

EDF Energy said at the time, although U.K. regulations do not permit the sale of power among electricity customers, regulator the Office of Gas and Electricity Markets authorized the project through its Innovation Link.