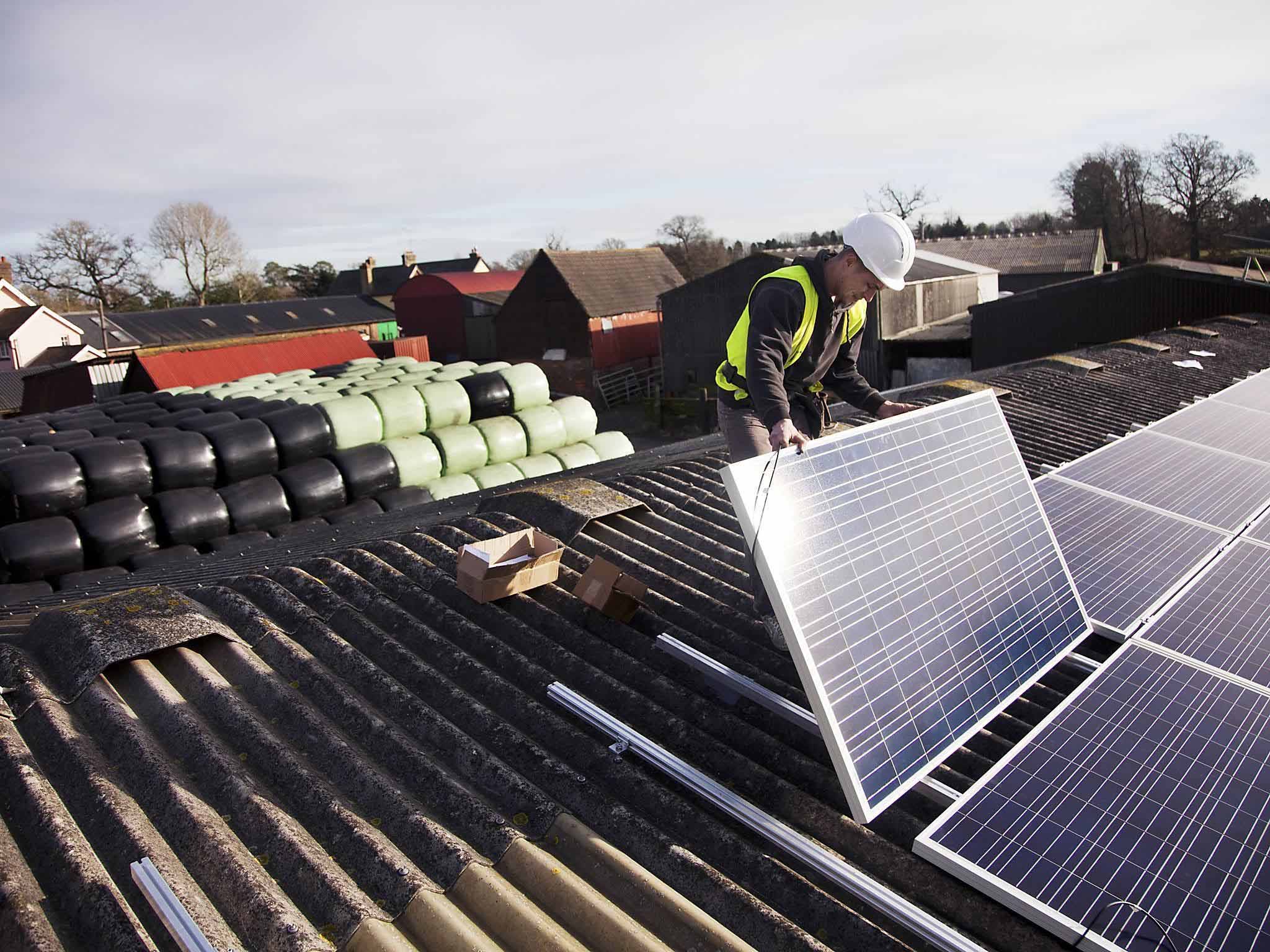 Raising VAT on solar panels from 5 per cent to 20 risks making their installation “entirely uneconomic”, experts have warned.

Although parliament declared a climate emergency earlier this month, rates for fossil fuels including gas and coal will remain at 5 per cent, while materials for some renewables will see tax rises of 15 per cent.

These rates will apply from 1 October and follow a consultation by HMRC which closed last week.

Sian Berry, co-leader of the Green Party told The Independent: “A climate emergency has been officially declared, yet we could not have had a clearer sign that the government has failed to even begin to grasp the urgency. Renewables, with energy conservation, are the future, yet once again the government is knocking them back.

“The suppliers, including many small independent companies in communities around the country, have been buffeted by the sudden removal of the feed-in tariff and by the end of export tariff.”

The Renewable Energy Association (REA) is contesting the HMRC proposal.

It said the rates hike had come as a shock to the industry as they were consulted on in 2015/16 “and considered to be finalised” at the 5 per cent rate “following assurances at the time from ministers”.

Despite the falling costs of technology in the industry, the REA said the rise “could mean the UK market is put at a strategic disadvantage for attracting investment and transitioning its energy system, effectively adding 15 per cent to the cost of most new projects’ equipment and penalising consumers who wish to reduce their carbon footprint.”

The association’s head of policy, Frank Gordon, said: “The proposed VAT rate hike hits the small-scale renewable energy industry hard during an already difficult landscape. This change risks setting back the UK decarbonisation of homes and businesses in the UK by a number of years.

“Despite recent mass climate-related protests and the UK parliament declaring a climate emergency, the government is again erecting a barrier to cutting emissions and increasing the costs for households who want to help. They are also failing to recognise the cumulative impact of withdrawing as many as 18 policy mechanisms that supported renewable energy deployment since 2015, which could leave the UK trailing behind on decarbonisation and clean growth.”

He added: “The REA hopes that government will listen to our recommendations, reconsider and address this issue urgently to utilise the hard work businesses have been engaged in to drive down the costs of solar and energy storage.”

Dr Jonathan Marshall, an energy analyst at the Energy and Climate Intelligence Unit, told The Independent the decision was the “latest in a lengthening list of government moves hurting solar”.

He said: “On one hand you have a government bigging itself up and marking all the milestones of progress – how much power we’re getting from sources that aren’t carbon intensive – and on the other hand you have quite a number of regressive policy moves which are slowing down the progress they seem so keen on.

“It’s not only increasing the VAT on solar, it’s also changing the whole framework of small scale renewables, so that its almost entirely uneconomic now to put solar panels on your house.”

The government said the decision brought the country in line with EU law which ruled in 2015 the discounted tax rate was illegal. But following the ruling, the government did not immediately enact the changes, and the European Court of Justice went on to publish a VAT action plan in 2016 with no comment on solar power.

An HMRC spokesperson said: “The government is proposing changes which would keep as much tax relief as possible available for Energy-Saving Materials while ensuring UK rules are in line with EU law.”

The new rates will come into force the same month as the UK’s deadline for leaving the EU.

The changes will apply to projects where the technology costs of installation are above 60 per cent of the total price. Labour costs will still benefit from the reduced rate of 5 per cent VAT.

Dr Robert Gross, from the Centre for Environmental Sciences at Imperial College London, told The Independent: “The UK is reluctantly complying with an EU regulation that runs contrary to EU aspirations for CO2 and renewables. On the other hand, the government did not need to remove the feed in tariff for micro-generation that did so much to support the growth of solar in the UK.

“Instead of removing the FiT it could have been set at a zero-subsidy rate that provided home and business owners with a secure long term income from solar panels at a fixed price at or below the price of conventional electricity.”

He added: “The government decided not to do this. [It is] nothing to do with EU laws.”

As a result, those wishing to buy solar panels for their homes will face higher costs, and at the moment they will not get the benefit of selling excess power back to the grid.

Previously the feed in tariff system allowed people to claw back some of the expense of installing solar systems on their homes, but the scheme was brought to an end in March this year.

The failure to receive compensation for contributing power to the grid is illegal, but the replacement system, the smart export guarantee, is yet to be finalised and rolled out.

The new system is designed to be more adaptive to the needs of the grid, and this will supposedly be reflected in payments to those generating excess power.

Dr Marshall said: “With the smart export guarantee, the power your solar panels generate will have a higher value if its generated when the system’s a bit short – so if it’s not very windy for example, you’ll get more money. It’s a sensible way of doing it, but the way the policy is coming through is so stop-start. At the moment, if you buy solar panels to put on your house, there’s no way of claiming any sort of payment for the electricity. You’ve got to hope you use it all yourself, or buy a battery at added expense.”