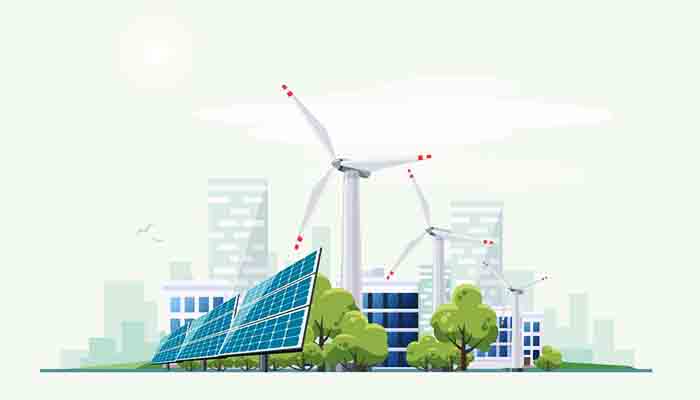 As you might have heard, the planet is warming up, and in response, people are trying to switch to cleaner energy, to heat it up less, or at least more slowly. So how’s that going?

A report released Monday goes into that question in considerable detail. The Renewables Global Status Report (GSR), released annually by the Renewable Energy Policy Network for the 21st Century (REN21, a think tank), digs into the growth rates of various energy sources, the flows of clean energy investment, and the world’s progress on its sustainability goals.

It is a treasure trove of information. It is also … really long. 250 pages long. So many words!

In an effort to save you, the modern information consumer, precious time, I have gone through the report and extracted the 12 charts and graphs that best tell the story of clean energy as of 2018.

Before we get started, a few background facts.

First, we’re still moving in the wrong direction. Global carbon emissions aren’t falling fast enough. In fact, they aren’t falling at all; they were up 1.7 percent in 2018.

Second, we’re still pushing in the wrong direction. Globally, subsidies to fossil fuels were up 11 percent between 2016 and 2017, reaching $300 billion a year.

And third, the effort to clean up is flagging. Total investment in renewable energy (not including hydropower) was $288.9 billion in 2018 — less than fossil fuel subsidies and an 11 percent decrease from 2017.

This is all bad news. The public seems to have the impression that while things are bad, they are finally accelerating toward something better. It’s not true. Collectively, we haven’t even succeeded in reversing direction yet. Despite all the progress described below, we’re still struggling to get ahold of the emergency brake.

1) Renewables are pulling ahead in the power sector.

To start with some good news: The shift in the electricity sector has effectively become unstoppable. Globally, more renewable energy capacity has been installed than new fossil fuel and nuclear capacity combined, for four years running. Some 181 GW of new renewables capacity was installed in 2018; it now makes up more than one-third of global installed power capacity. These are mainstream power sources, here to stay.

As you can see in the chart below, additions of wind and bioenergy capacity have been fairly stable; hydropower is down a bit. The primary reason renewable capacity additions are growing is the rise in solar photovoltaic (PV) panels.

Of the new renewable energy capacity installed in 2018, 55 percent (about 100 GW) was solar PV; wind power had 28 percent, and hydropower 11 percent. The future of the world basically depends on solar continuing to boom.

Why is solar PV rising so rapidly? Mostly China.

The graph below also shows rapid solar PV growth in the US, Japan (thanks to Fukushima and the subsequent shutdown of nuclear), and, more recently, India.

4) In fact, China is leading all the charges.

When it comes to energy, China is usually the biggest and the most, no matter the category. It was responsible for 32 percent of all global renewables investment in 2018. It was the lead investor in, and leads the world in installed capacity of, hydropower, solar PV, and wind.

(A couple of things to note on the graph below: Japan’s unusually high proportion of solar and the comparatively large role of bio-power in the EU and US.)

5) Renewable energy is starting to make a dent in electricity.

All the growth and investments in renewable electricity are starting to add up. Renewables represent more than a third of the world’s installed capacity and, as the graphic below shows, more than 26 percent of global electricity produced.

That said, hydropower, at almost 16 percent, makes up more than half the renewables total. What people tend to think of as renewables, wind and solar, make up only a combined 8 percent. Even in electricity, renewables have a long way to go.

6) Solar is creating the most jobs.

An important aspect of the political economy of renewables: Solar PV creates more jobs. It accounts for the bulk of the world’s renewable energy jobs, despite being a minority of renewable energy capacity. Wind, which leads solar in capacity, creates far fewer jobs. Solar PV is very labor-intensive.

7) But electricity is only part of energy consumption, and not the largest part.

There are 169 countries, at the national or state/provincial level, that have passed renewable energy targets. Meanwhile, the report says, “only 47 countries had targets for renewable heating and cooling, while the number of countries with regulatory policies in the sector fell from 21 to 20.” Fewer than a third of all countries worldwide have mandatory building codes, “while 60% of the total energy used in buildings in 2018 occurred in jurisdictions that lacked energy efficiency policies.” Only about a quarter of industrial energy use is covered by industrial energy-efficiency policies.

It’s not much better in transportation, where “fuel economy policies for light-duty vehicles existed in only 40 countries by year’s end and have been largely offset by trends towards larger vehicles.”

This is the story in the US and in the world at large: Renewables are starting to make a dent in electricity, but they are lagging badly everywhere else.

8) Transportation is showing signs of rapid movement toward electrification.

While transportation is still dominated by fossil fuels, a shift is underway. In 2018, “the global number of electric passenger cars increased 63% compared with 2017,” the report says, “and more cities are moving to electric bus fleets.”

Here, too, China is outpacing the rest of the world, though shoutout to the tiny country of Norway, whose aggressive EV policies have it showing up in global statistics.

There’s a special report-within-the-report about the booming prospects for clean energy in cities worldwide. On average, cities — which represent 65 percent of global energy demand and house more than half the world’s people — use a higher percentage of renewable electricity than countries. Already, there are at least 100 cities around the world using between 90 and 100 percent renewable electricity. At least 230 have set a 100 percent renewable energy goal in at least one sector.

10) Progress is being slowed by fossil fuel subsidies.

Globally, that is “about double the estimated support for renewable power generation,” the report says.

And that’s just direct subsidies. As my colleague Umair Irfan reported, a recent paper from the IMF estimates total fossil fuel subsidies — both direct, in terms of tax and cash transfers, and indirect, in terms of unpriced environmental damages — reached $5.2 trillion in 2017.

And they are concentrated in countries where they will be difficult to root out.

11) Energy intensity is declining, but not nearly fast enough.

Every climate model that involves humanity hitting its carbon targets involves rapid declines in “energy intensity,” i.e., the amount of energy used to produce a unit of GDP. In theory, if you can reduce energy intensity fast enough, you can offset the natural rise in energy consumption (from population and economic growth) and even cause total energy demand to decline.

In theory, anyway. In reality, global energy intensity has declined just 2.2 percent in the past five years. That has not been enough to offset the rise in global energy demand, which crept up 1.2 percent.

12) Renewables have a long way to go and a short time to get there.

So what does all this add up to? One (admittedly imperfect) way to mark the progress of renewables is to measure them against total final energy consumption (TFEC), which adds up all energy consumed worldwide.

As of 2017, fossil fuels were still providing about 80 percent of humanity’s energy, which is roughly what they’ve been providing for decades. Excluding traditional biomass, with all its problems around clearcutting, monocropping, and competing with food for land, you’re left with about 13 percent plausibly climate-friendly energy (different people may want to exclude other sources as well, but the larger point stands).

That 13 percent needs to get to 100 percent, or close to it, by 2050 — which is, you will note, just 30 years away. Thirty years ago, I was 17, listening to heavy metal and drinking wine coolers at barn parties. It doesn’t seem like that long ago.

Why is TFEC a flawed measure? Because a huge, huge chunk of that energy consumption is waste. If you look at a “Sankey diagram” of US energy use, which shows the origin and destination of all energy sources, you’ll see that fully two-thirds of the energy that enters the economy ends up “rejected,” i.e., wasted.

That’s because fossil fuel combustion is wasteful. Mining or drilling fossil fuels, transporting them, refining them, burning them, converting them to useful energy, using the energy, disposing of the waste and pollution — at every single stage of that process, there is loss. Burning fossil fuels, for electricity, heat, or transportation, inherently involves enormous levels of waste.

Renewable electricity, which will be the world’s primary energy source if it is to tackle climate change, is simpler. It involves no combustion and fewer conversions generally. Electric motors are simpler than combustion engines, with fewer moving parts, substantially lower maintenance costs, and much higher efficiency. Electrified heating and transportation sectors can be integrated into electricity grid operations, creating system efficiencies.

In short, economies running on renewable electricity will consume less energy because they will waste less energy. They might not consume two-thirds less — waste will never reach zero, and there will be some rebound effect that comes with greater efficiency — but they certainly won’t need to replace the full 80 percent fossil fuels is providing now. And renewable electricity will radically reduce overall energy intensity, even if all it does is substitute for current energy uses.

So the task ahead isn’t as daunting as it might appear from that last chart … but it’s still pretty daunting. Even if overall energy demand falls, all renewables will need to grow, rapidly, across all economies.

The world’s governments urgently need to look past the sparkly good news in the electricity sector and bear down on heating and transportation, where most of the energy is being consumed. Energy systems need to be rapidly electrified and integrated, which will require policy support at every level.

They could start by getting rid of those damn fossil fuel subsidies.