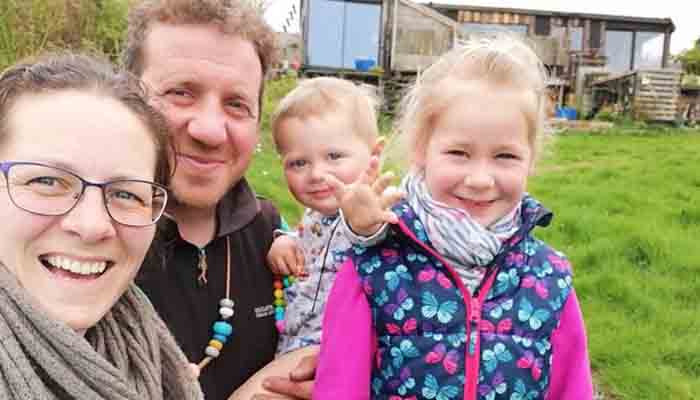 The government proposes reducing UK greenhouse gas emissions to almost zero by 2050, under a new plan to tackle climate change. The Victoria Derbyshire programme met a family who live self sufficiently and provide a glimpse of the kind of changes we may all need to make.

“The leap – handing your notice in, going off and not having a job – that’s scary.”

Charis Watkinson, 34, is reflecting on her and husband Matthew’s decision two years ago to give up their jobs as vets and their lives in Essex to go completely “off-grid”.

The couple now live in rural Pembrokeshire with their two children – Elsa, five, and 18-month-old Billy. Their home, Beeview Farm – named after the bees they keep for honey – is so remote and hilly that they direct visitors to a field so they can be picked up in a 4×4.

The family generate their own electricity from solar panels and gas from their food waste.

Their home – swapping gas on the grid for renewables – is an example of how the UK population may have to live if the government is to meet its net zero emissions target.

Britain is the first major nation to propose this target – widely praised by green groups.

The Watkinsons’ house is bigger than it first looks, built from old horse boxes, caravans and trailers.

“It’s basically junk, scrap vehicles and junk – we’ve put most of it together,” 42-year-old Matthew says, before showing off his many inventions.

For example, the spare bedroom is an old 4×4 with a full double mattress and an enviable ocean view. They have an outdoor and indoor shower, both equipped with hot water, made from old IBC tanks, commonly found on British farms. Metres away is a Swedish-style hot tub. Round the corner is Biff, the affectionate name given to the family’s biodigester.

”What we’ve essentially got is an artificial cow stomach, full of the normal bugs from a cow’s stomach, and we are just feeding those bugs,” Matthew explains. “And those bugs are turning what we feed it into methane.”

The family use this to power their oven and hob.

Wales has one of the most progressive policies in the UK regarding living off grid due to the decades-old One Planet Development Scheme. It allows agricultural land to be lived on when planning permission would otherwise not be granted, if certain conditions are met.

These include making a basic income off the land, which the Watkinsons do by selling honey and eggs, and providing all their own energy and water. They sell about 350 eggs a week, earning up to £800 a month.

Participants must increase biodiversity on the land and the family have done this. They have rented horses to re-sow meadows in a bid to “re-wild” the land. They must also grow a proportion of their own food – with a minimum of 30% and target of 65%. They were making nettle pakoras when I visited.

The only bill the family pay is their council tax.

“One of the most liberating things, from moving up here, is no electricity bills, no gas bills, no water bills,” says Matthew.

But they have not reduced the amount of electricity they consume, explaining they still use it for charging mobile phones and laptops, as well as their TV and fridge.

“Everybody’s used to a situation where things are available all the time, and we started to feel less and less secure,” Matthew says. “We’d like to be responsible for our own energy, our own food.”

Tim Brewer, an expert in off-grid living, says almost every household could adopt self-sufficiency measures to some extent.

But Matthew thinks it is not that simple.

“There’s loads of people who’d love to do this already, but the planning process is such a barrier I don’t know how many people will end up doing it in time to make a big difference,” he says.