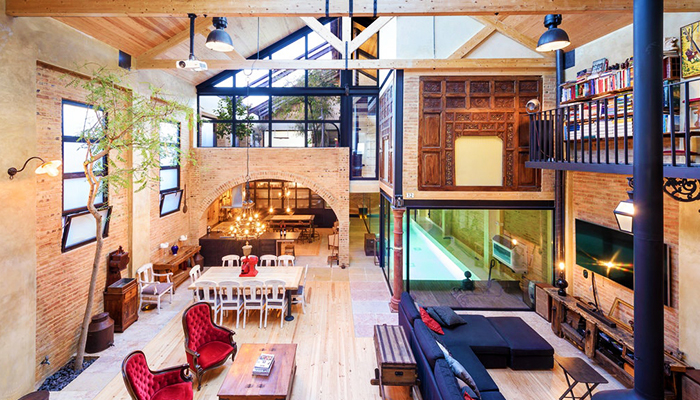 An Expansive Home in the Heart of Lisbon

This three-bedroom, loft-style home is in Penha de Franca, a residential section of Lisbon, Portugal, near the city’s historic center and the coastline on the Tagus River.

The 5,700-square-foot house was built in 2017 over and around what had been a garage, using thousands of handmade bricks, said the owner and designer, Luís Catarino. Mr. Catarino, a civil engineer who is trained in architecture, said the interiors are intended to spark inspiration with their mix of materials: old and modern, domestic and industrial, common and unusual.

“It’s a flexible space, a multifunctional place, as I believe in the future most people will work from the home,” he said. “I prepared the house to be a space to write, to make sculpture, to paint. And there are wonderful acoustics for music.”

The asking price includes all furnishings, with the exception of the library books and some paintings, Mr. Catarino said.

The home is entered through a grotto-like hallway with an overhead image of angels, a recurrent theme that Mr. Catarino drew from Wim Wenders’s 1987 film “Wings of Desire.” An arched doorway leads to a large, open-concept living area with wood floors, brick walls and vaulted, 26-foot wood ceilings lined with skylights.

A hanging fireplace anchors the lounge area, which has a ladder leading to a mezzanine library. Across the room, an antique chandelier hangs over a dining table that seats 10.

The open kitchen, framed by a large brick archway and lit by another chandelier, has an island with a built-in cooktop, a farm-style sink, a large pantry and a dining table.

A glass wall separates the kitchen from the indoor lap pool, in an enclosed space that includes a hot tub, a sound system and an electric retractable cover.

Above the kitchen and pool are the master bedroom and a rooftop meditation garden. Antique carved wooden doors, wall trim and cabinetry — all collected by Mr. Catarino from various countries over the years — adorn the bedroom, which has a hanging fireplace, ample closet space, skylights and a claw-foot tub. The adjacent garden has a retractable roof, six trees and a swing.

At the opposite end of the living area, a glass wall opens to a garage-like ground-level space that could serve as a work area. Iron stairs lead up to an open studio area overlooking the ground floor. Another stairway leads to a third level, where there are two more bedrooms and a bathroom.

The home was built to high energy-efficiency standards, with solar panels supplying about 40 percent of its energy needs, Mr. Catarino said.

Lisbon is Portugal’s capital and largest city, with about 500,000 residents. The Penha de Franca section is about a mile from the southeast coast and the Tagus River, which flows into the Atlantic Ocean 10 miles to the west. The neighborhood has mostly midpriced and high-end homes and sits atop one of the seven steep hills in the city. Each hill has a miradouro, or viewpoint, offering vistas of the city and the water.

Avenida da Liberdade, Lisbon’s main thoroughfare, with its upscale stores, trendy restaurants and historic plazas, is accessible via the city’s metro system, as is Monsanto Forest Park, one of Europe’s largest parks. The closest station is about a 15-minute walk, Mr. Catarino said.

Lisbon Airport is about a 10-minute drive from the house. A new airport with nearly double the capacity is under construction in Montijo, about 25 miles from the city center; completion is expected in 2022.

With a population of just under three million, the Lisbon metropolitan area extends to the Atlantic Ocean on the west coast of Portugal and to the Península de Setúbal, across the river, to the south. The region has attracted increased international interest in recent years, largely because of two buyer-incentive programs established by the government as the country struggled to recover from a debt crisis, said Patricia Barão, head of the residential department of JLL, a real estate services company.

The Non-Habitual Residency program, introduced in 2009, allows part-time residents from other countries to earn foreign income tax-free for 10 years, while the Golden Visa program, introduced in 2012, grants residency permits to foreigners from outside the European Union who buy property valued at 500,000 euros or more. Buyers need not live there, but must own the property for more than five years.

Ms. Barão cited Lisbon’s comfortable climate, political stability and affordable cost of living as other factors in its growing appeal. “You can go to a very good restaurant close to the river and pay 20 euros for a nice meal with good wine,” she said.

Home prices have been increasing since 2014, during a time of considerable new construction and renovations in the city, said Rafael Ascenso, the general manager of Porta da Frente Christie’s, which has this listing.

A new two-bedroom apartment can sell for 400,000 to 2 million euros ($450,000 to $2.25 million), depending on location, he said. The average home sale price overall last year was around $480 a square foot, according to an analysis by Knight Frank.

The highest housing prices are in the city’s historic and cultural districts, including Chiado and the beach suburbs of Cascais and Estoril, where there are marinas and golf courses, west of the city center. Prices in these areas have doubled over the last eight years, to at least $835 a square foot, Mr. Ascenso said.

Still, home prices in Lisbon remain considerably lower than those in other major European cities. The Knight Frank data showed that, as of the last quarter of 2018, 1 million euros ($1.12 million) could buy 1,345 square feet in Lisbon, compared with 463 square feet in London, 560 in Paris and 970 in Berlin.

Foreign investors often buy property to rent, but short-term rentals aimed at tourists face tough competition, said Alex Koch de Gooreynd, a partner at Knight Frank. “Airbnb is a massive business in Lisbon, and at the moment there are very few restrictions,” he said. “Investors should focus on long-term instead of short-term holiday lets.”

Who Buys in Lisbon

The Non-Habitual Residency program has gained popularity in particular with citizens of the United Kingdom, as they face continued uncertainty around Brexit, Mr. Koch de Gooreynd said. While British citizens have long vacationed in southern Portugal, he said, “more and more of our clients want to move to the city center or Cascais.”

Since the introduction of the Golden Visa program in 2012, the vast majority of applicants have been from China, according to data from Knight Frank.

Mr. Ascenso said most of his foreign buyers are from Brazil, France, Sweden and South Africa.

There are no restrictions on foreign buyers in Portugal.

While it is not customary for buyers to hire a lawyer, foreigners applying for one of the incentives typically hire counsel to guide them through the various requirements, Mr. Ascenso said.

Listings are not exclusive, and sellers often list their homes with more than one agency, he said. Agents’ commissions, paid by the seller, are between 4 and 6 percent.