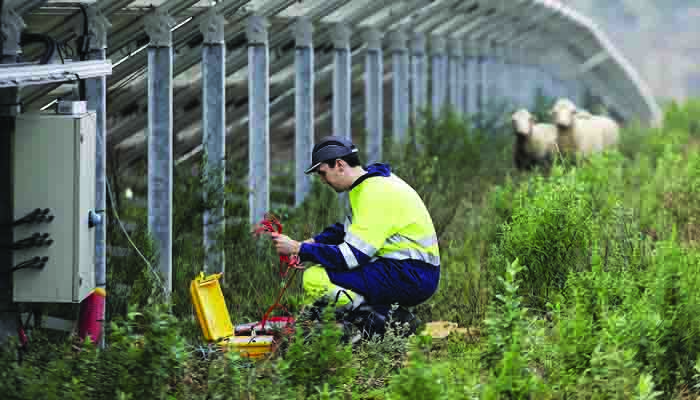 A boom in self-consumption and gigawatt-auctions for solar parks are drawing developers to France’s historically underwhelming photovoltaics market. Europe’s dozy giant has long punched beneath its weight, but pro-renewable reforms are helping the country cut red tape and unlock its vast solar potential.

With 4 GW of projects in the pipeline and more than 20 GW scheduled for auction over the coming decade, the French photovoltaics market is rapidly emerging as a heavyweight in Europe’s solar renaissance, one that is attracting investment both from within and beyond its borders.

“Due to its size, growth, and regulatory framework, France is one of the most attractive markets in Europe,” says Philippe Vignal who heads the French subsidiary of German electricity supplier EnBW. His parent company is broadening its market activities in France. Last month, it submitted a binding offer to the owners of Valeco Group, a French developer and operator of wind and solar farms.

EnBW’s actions might have raised eyebrows a few years ago. France has traditionally trailed behind its European neighbors in terms of PV installation volumes. Its annual capacity additions have rarely exceeded a single gigawatt, and the government abruptly scaled back its past feed-in tariff scheme in 2010.Despite this rocky start, Céline Mehl from France’s environment and energy agency (ADEME) says that the French market for solar is now taking off in earnest. “In January 2019, the government announced solar energy targets of 20.6 GW by 2023 and 44.5 GW by 2028,” she says. “This is very ambitious.”

France’s targets are backed by a Multiannual Energy Programme (PPE) which enshrines into law both multi-gigawatt auctions and financial incentives for rooftop and ground-mounted projects of up to 30 MW. Mehl says that these objectives reflect France’s long-established ambition to position itself as a leader in climate action. The direction is not new, but the pace it is gathering is unprecedented.

The scale-up of France’s renewable energy targets is striking for several reasons. It counters a trend among European, American, and Asian governments to scale back financial incentives for solar PV. The auctions are also controversial in requiring applicants to assess the carbon footprint of modules deployed in their projects.

“What we ideally hope for is that the assessment in the auctions could progressively extend to other environmental impacts than the carbon footprint of the module, and then of the photovoltaic installation over its entire life cycle,” says Mehl. She points to emerging Ecodesign legislation and Ecolabels as examples that broader environmental impact assessments are gaining international traction among policymakers promoting sustainable development.

The first four rounds of France’s PPE auctions have so far proved highly successful – grid operators and government services have struggled to keep up. David Gréau from ENERPLAN, a major French solar energy trade association, says that these delays in obtaining construction permits are severely limiting the flow of ground-mounted PV arrays reaching the French market each year. “In 2018, less than 900 MW of photovoltaics were installed,” says Gréau. “However, since 2017, authorities have signed off on more than 2 GW of solar projects each year.”

“There is a natural delay between the selection and construction of projects,” says Gilles Leandro, Director for Solar Development at Engie Green, France’s solar market leader with 1.2 GW of PV in operation. “However, administrative procedures could clearly be simplified and accelerated.” Delays can arise from ill-defined rules or a lack of capacity in government agencies to deal with the volume of new requests lodged by developers. Gréau says that the French government has set itself ambitious renewable energy targets and is now tuning the machinery needed to reach them.

“The stakes are high,” he says, pointing out that meeting the objectives set out in the EPP will require installing multiple gigawatts of solar each year. That includes making sure that projects that win French auctions eventually get built.

In 2018, the French Ministry for the Ecological and Solidary Transition set up a working group to tackle administrative roadblocks in bringing solar projects online. The group brings together representatives from across the value chain, including from ENERPLAN, which says that members have already helped identify steps that would benefit from clearer deadlines and external support.

Guillaume Perrin of France’s National Federation of Licensed Authorities and Authorities (FNCCR) represents public service providers from local authorities across France. He says that the working group is taking action to avoid holdups in connecting PV systems to the grid.

“We have written a new sample contract in collaboration with French distribution system operators that now fixes a two year deadline in connecting photovoltaic installations,” he proclaims. “After this period, grid operators can be fined, and local authorities can take over part of the connection task themselves.”

Perrin argues that the breadth of players participating in these negotiations has attracted media attention to the energy transition and helped address some of the existential questions that haunt markets abroad.

“Grid-connection is one objective, but the ministerial working group looks at the broader picture,” says Perrin. “We have notably made progress on the rules governing self-consumption for energy consumers with rooftop photovoltaic systems. That is a very important segment that could unlock many projects.”

According to French grid operators, rooftop systems account for roughly half the PV capacity connected to their network. Some systems are the legacy of the ill-fated feed-in tariffs provided by the French government between 2006 and 2010. Most, however, have come online since the 2016 PPE introduced a new generation of self-consumption incentives.

“So far, 20,000 self-consumption installations have gone up on buildings across the country,” says David Callegari, Founder and CEO of In Sun We Trust, a startup that puts residential electricity consumers in contact with local solar installers active in the rooftop market segment. “We expect that figure to increase by 50% this year.”

France’s transmission system operator, RTE, is counting on 1.25 million French self-consumers to be connected by 2026. Callegari explains that the growth spurt in this segment will be driven in part by rising electricity rates and the streamlining of incentive schemes.

“There is still an issue with the complexity of regulation,” says Callegari. “There are good reasons for how solar subsidies are structured in France, but the options are so numerous and complicated that they puzzle non-specialists.”

The website of In Sun We Trust provides a user-friendly interface for homeowners to navigate government incentives and other practical hurdles to install solar panels on their roof. By providing transparency, Callegari also hopes to restore trust and raise public awareness of solar’s investment opportunities. It’s a service that could expand deployment and opportunities for installers and suppliers.

“Today, nearly all buildings in France can save money with solar,” says Callegari. “There just needs to be a kick in the market for people to realize how good it is.” He points to a vicious cycle common in emerging markets, in which modest volumes lead installers to raise system costs, and higher system costs limit installation numbers. Today, Callegari says that the French solar PV market is building up the critical mass to tip that mechanism into reverse and create a virtuous cycle of decreasing costs and rising installation numbers.