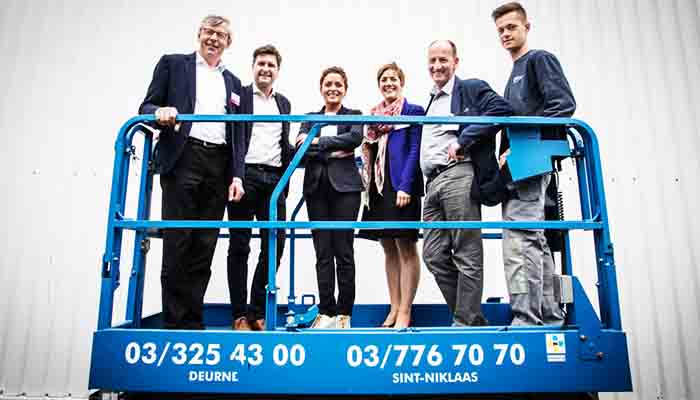 With a capacity of 2,2 MW, the rooftop array is at the industrial plant of Belgian company Ontex, which will buy almost all the electricity generated from project developer Menapy under a 15-year power supply deal.

Eeklo in Flanders is the location for Belgium’s first PPA-driven solar project. The solar rooftop, at an industrial plant belonging to Ontex – a producer of disposable personal hygiene products – comprises 7,200 panels and should generate more than 2 GWh of electricity annually.

The €1.6 million plant, owned and operated by investor and developer Menapy, will sell electricity to Ontex under a 15-year power purchase agreement (PPA). The energy generated will be sold “at a lower price than the market”, according to Tom Pollyn, co-founder and managing partner of Menapy.

After 15 years Ontex will own the array and the electricity produced will cover 7.5% of the plant’s needs, with only 1% of the power generated injected into the grid. The rooftop will use 7,200 Suntech panels, 50 kW SMA inverters and an Avasco mounting structure.

Through participatory loans, on the basis of the WinWin model supported by the Flemish government, Ontex employees can participate in financing the project. With a crowdfunding process still under way, the number of participants is not yet known but Pollyn hopes more than 10% of the employees – more than 170 people – will take part. Each person can give €500-2000.

According to plant manager Jef Monballyu, Ontex is aiming to be CO2-neutral by 2030 and the plant has been using green electricity since 2017. “This is an excellent example of self-consumption via green energy produced locally, without [upfront] … investment [by the recipient of the power],” said Pollyn. “On the basis of this successful first partnership we are currently developing similar projects for Ontex in Spain and Italy. This is a classic PPA.”

At an inauguration ceremony for the installation, Flemish Minister of Finance, Budget and Energy Lydia Peeters said: “Thanks to the third party financing from Menapy, Ontex Eeklo can take the step towards renewable energy. With this solar installation – the largest on the roof of a company since 2013 in Belgium – Ontex is making a significant contribution to meeting our renewable energy goals by the end of 2020. We need these examples to [show] those who doubt that it is possible.”

At the end of last year, Belgium had a little more than 4 GW of installed PV generation capacity, about three-quarters of which was in Flanders. Most of it was in the form of residential PV systems with a capacity of no more than 10 kW.

The Ministry of Energy’s commitment is to increase cumulative installed capacity in the region to 6.7 GW by 2030. To achieve that, new provisions such as the “direct line” model,were introduced by former Minister of Energy for the region Bart Tommelein. They aim to improve the terms of private sector PPAs while stimulating the development of commercial and industrial projects, which have so far seen limited development in the country.