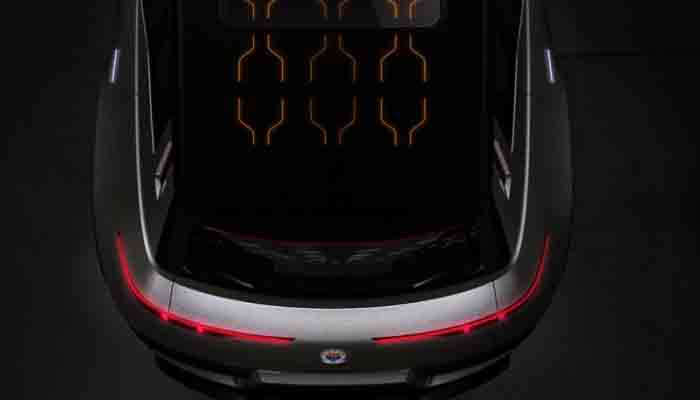 Henrik Fisker is fighting tooth and nail so that his company does not end up disappearing. The automotive industry is tough when it comes to new electric vehicles and therefore in order to not lose interest, Fisker slowly publish teasers of its upcoming Fisker electric SUV week by week until its near launch on December 2019. The new set of teaser photos allows us to see the solar roof that the electric SUV would have.

A few days ago, Fisker published teaser photos that showed a small portion of the roof of the Fisker electric SUV. Now we can see a better look in that area, since one of the newly published images shows a top view of the roof. From this perspective, we can see the final portion of the roof, will make use of a large electric solar roof, the same as the first ever full-length sunroof that Fisker was used in the old Fisker Karma, today called Karma Revero.

At the moment, we do not know the performance that this new solar panel roof of the Fisker electric SUV will have and how it can improve the autonomy range of the vehicle. However, what Fisker is sure of is that it is not an ordinary solar roof. This is because the roof will use special photovoltaic cells to power the batteries of its powertrain at the same time as the auxiliary comfort elements.

Another data that indicate the complexity of the roof is the ability to open. According to Henrik Fisker, it will offer passengers an “outdoor atmosphere at the touch of a button.” Therefore, it could turn this model into a kind of convertible electric SUV.

Finally, Fisker has assured several times that it will be the most sustainable vehicle in the world. The solar roof and the Fisker electric SUV as a whole will be manufactured using a large number of recycled materials from ocean debris and other sources. As Fisker said It’s not just another EV, it’s an electric vehicle that can change the world.

The new electric SUV of Henrik Fisker’s company does not have a name yet, but we already know that it has been designed to fight face to face with the likes of Tesla Model Y or Jaguar I-Pace, so we can expect a model around 4.5 meters long.

At the mechanical level, we do not know too much information yet, but Fisker has said that it will have up to 2 electric motors, arranged on each of the axles to have a total traction configuration, and that these will be powered by batteries of up to 80 kWh that will achieve an autonomy range of around 310 miles, a figure more than its main competitor Tesla Model Y which can only achieve 300 miles on its long-range version.

In a boast of optimism that can only be explained by the desire to hoard headlines, Fisker has already confirmed that the base price of the model will be around $ 40,000 in the United States, a figure that directly attacks the most basic version of the new Model Y.

According to Fisker’s plans, the official presentation of the Fisker electric SUV will take place this December and that it will be up for sale early next year at around $40,000. When the event takes place, it will be necessary to see if it maintains elements such as the camouflaged door handles or the full-length solar roof. We are excited.