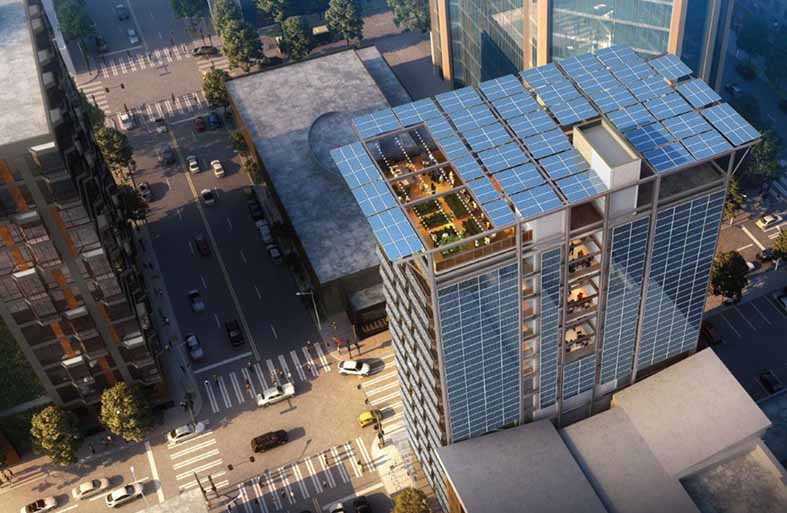 One of the greenest, most futuristic and solar-panel-studded projects ever in Seattle is planned at 303 Battery St. in Belltown. The corner property hasn’t sold yet, but Renova Capital Partners of Denver and CollinsWoerman’s prefab arm, Sustainable Living Innovations, are well advanced with their final design. Their venture is called Sustainable Living Partners.

The plan has its second and likely final design review at 7 p.m. tomorrow at City Hall, 600 Fourth Ave., Room L280.

SLI calls its modular scheme a “kit of parts” system, which employs pre-assembled wall and floor panels. Its pilot project was 47+7 in the University District. That six-story, 24-unit project sold two years ago, not long after completion, for almost $9 million. A third possible SLI project is planned at 1800 Terry Ave. in the Denny Triangle. If built, it could have 38 stories and 424 apartments.

Scaled midway between those two projects, 303 Battery will have 15 stories and 112 units, with no parking and about 1,900 square feet of retail/commercial space on the corner of Third Avenue.

The proposal hasn’t changed significantly since the last review in August. Twenty-seven units will be affordable under Mandatory Housing Affordability requirements and the city’s multifamily tax exemption program. All units, identical within each stack, will have between about 350 and 900 square feet.

What’s most interesting in the updated plan is the number of solar panels. Since 303 Battery is using city’s Living Building Pilot Program, to gain more size for green features, it will generate 48% of its energy from those photovoltaic panels. (The rest will come from offsite renewables, as part of the net-zero target.)

That means the roof will have an array with around 5,000 square feet above the roof deck. That amenity area, with about 1,470 square feet, could also be partly open to the sky. The developers are asking the city’s permission to extend the roof panels beyond the property lines.

Overhangs such as awnings are permitted by the city with certain limits. The 303 Battery solar panels would overhang the sidewalks and alley by about 10 feet and 7 feet (but not over the property line above the neighboring Moda apartments).

SLI writes, “The overhangs provide a beautiful ‘crown’ to this building that significantly enhances the skyline and the community.”

The west-facing balconies will have semi-translucent panels. And the south-facing facade, above the seven-story Moda building, will have still more panels (though opaque, like those on the roof).

SLI didn’t specify the overall number of panels, their total surface area or their provenance.

SLI says the wall and floor panels will be assembled in Tacoma by Fastwalls, which has plants in Knoxville and Calgary.

SLI says that a general contractor has yet to be hired. The project has applied for phased permits, and SLI hopes to begin excavation for the one level below grade this fall. Construction could take as little as 12 months — about half the period of conventional onsite construction.

SLI hopes to close the land deal in September. The 6,480-square-foot property, with its century-old, two-story office building, last traded for about $2.2 million in 2012 — five years before that area of Belltown was upzoned to 145 feet.

SLI was formed after the completion and sale of 47+7. It estimates that its system will reduce construction costs by 10 percent, and lower operations and maintenance costs by 20% to 30%. Partner Renova specializes in renewable energy assets, and says it has developed and capitalized over $600 million of energy infrastructure, including solar.